Before A Song of Ice and Fire brought us Game of Thrones, stone care professionals all over the world were playing the game of stones. While stones have been used in physical games for centuries from marble chess pieces to mancala, the stone game has gone through many iterations since the dawn of time when it comes to building materials.

Just as the set designers did when they created the Map Room Table at Dragonstone, the use of clay as a building material dates back centuries and clay bricks have been a popular building material since the Babylonian civilization in 3000BC as it is extremely versatile, much like it’s much more expensive cousin, marble.

When pulling inspiration for Longclaw’s pommel, the wolf’s head it sports is described as being carved out of a pale stone which looks remarkably similar to marble. Luxury stone for a luxury sword; a match made in stone heaven! Marble itself is one of the more expensive types available for everything from vanity tops to floors and kitchen counters. While most people think marble is expensive just because it’s a luxurious stone type, it’s actually the quality of the stone itself that makes it so expensive. When you work with a high quality marble, such as Italian Carrara, you also tend to work with higher prices. Since marble is a natural stone, there are natural variations in the stone from each quarry that change the quality. Marble that is formed in an area where the limestone had many impurities can end up being weaker than marble that was formed in an area such as Italy where the deposits are much more pure, and therefore much stronger. 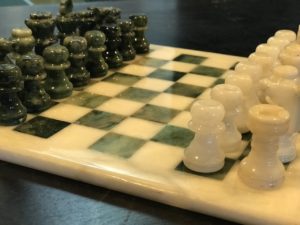 So what about those physical games? While you may regularly see marble chess sets or backgammon pieces today, the Ancient Romans loved to use a mix of wood and marble when creating game pieces and boards for games such as Nux and Latrunculi, an ancient roman form of chess. While Latrunculi evolved to modern day chess, the rules of Nux have been lost over time, but we do know that it was a game used to signify the Winter Solstice that would be celebrated by friends and family giving each other a small bag filled with a mix of nuts and stone game pieces.

With it’s gothic feel, the use of stone and steel together, and it’s timeless and enduring landscape, Game of Thrones has captured the hearts of millions. Before you go beyond the wall of stone yourself, be sure to call the professionals at Boston Stone Restoration for all of your kingdom’s stone needs!

Here at Boston Stone Restoration we feel like a family. We have a fabulous crew of technicians who...
Read More

Exactly one week before the 4th of July weekend, we got a call from a contractor on Nantucket who...
Read More

There's nothing we love more than a quaint New England Country Inn. Charming and cozy, they are...
Read More

So, you took a hard look at your kitchen and decided something that some people may find crazy....
Read More

This year’s list is about little indulgences! Small Business Saturday this year is Saturday,...
Read More

St. Augustine Catholic Church in Providence, RI was originally established in 1929 and the...
Read More

With spooky season culminating tonight with Halloween, we’ve been keeping an eye on...
Read More

One of the things that makes us most happy at Boston Stone Restoration is a repeat customer. We...
Read More

Imagine you go on vacation and you hire a cleaning service to take care of your home while you are...
Read More