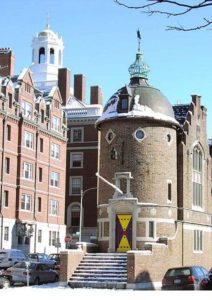 Cambridge, Massachusetts — One of the gems of Harvard University’s architecture is the Harvard Lampoon Building at 44 Bow St. Cambridge, MA. Built in 1909, and also called the Lampoon Castle, it was designed by Edmund M. Wheelright. It is a very unusual looking building. If fact the front was designed to look like a face wearing Prussian war helmet ! It housed the Lampoon offices and meeting rooms and originally a small bookstore on the first level.

The Harvard Lampoon is the oldest continually published humor magazine in the world, originally published in 1876. In its early years the Lampoon was known for its wild parties that often resulted in smashed plates and furniture.

It was after a season of such celebrations that resulted in a call to Boston Stone Restoration. The 100 year old floor was in need a thorough cleaning and restoration. Although the interior is a highly guarded secret I was permitted to photograph the just to floors!!! 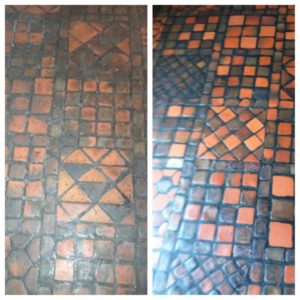 Some of the people who walked the halls of this famed building include, Robin Williams, Robert Dinero, and Henry Kissinger. The only difference is that they left footprints, and I cleaned them up!

For hundreds of years, New England’s natural stone resources have been an asset to the region’s...
Read More

Have you ever been inside the Pastore Federal Building in Providence, RI?...
Read More