For hundreds of years, New England’s natural stone resources have been an asset to the region’s development. With quarries throughout the area, like those in Quincy, Plymouth, and East Longmeadow, New Englanders have used these resources to create, explore, and memorialize. Quincy, due to its proximity to the city and plentiful supply of natural stone, became key to the local granite industry.

Besides being the foundation of the United States’ granite quarrying industry, the Quincy Quarries is probably most famous for supplying the granite for the Bunker Hill Monument. The monument was to be built in Charlestown, which created a need to transport the granite from the source to the building site. As a result, the Granite Railway Company established the first commercial railway in the United States, aptly named the Granite Railway. The railway spanned three miles, from Quincy to the Neponset River in Milton. Once the horse-powered train transported the granite to Milton, the material would then be shipped over to Charlestown until the monument’s completion in 1842. 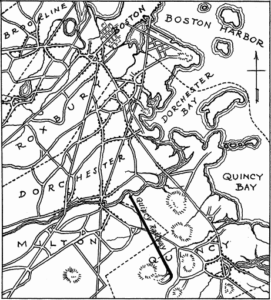 The groundbreaking creation of the Granite Railway became a significant development in both commercial and passenger railways. Designer and builder Gridley Bryant implemented several inventions, such as railway switches, turntables, and double-truck cars. Initially, this railway was only established to transport granite for the monument. However, not fifty years later in 1871, the railway was taken over by the Old Colony and Newport Railway, which added new tracks and steam trains so railway could transport the quarried granite directly to Boston. Eventually, it was absorbed into the New York, New Haven and Hartford Railroad.
Much of the original rail’s right of way was incorporated into the planning and construction of the Southeast Expressway, or I-93. The Incline system that was used to hoist granite from the quarry to the railway and a surviving portion of the railway itself have been preserved. Both were added to the National Register of Historic Places in 1973. The Department of Conservation and Recreation created trails that connect the quarries to the remnants of the railway.
The Quincy Quarries saw its last active quarry in 1963 but is now a reservation area that is popular for rock climbing and picnicking. See these climbing and walking trails.
If you have stone dating back to the Quincy Quarries or a brand new marble floor the needs some shine, Boston Stone Restoration’s got you covered. Give us a call today at (781) 793-0700.

Have you ever been inside the Pastore Federal Building in Providence, RI?...
Read More

At Boston Stone Restoration we love to work on old buildings with lots of history and charm. The...
Read More