As stone care experts, we at Boston Stone Restoration have had the honor to care for, explore and marvel at the many grave markers and memorials scattered around New England. You can learn a lot from stone! Take some time this Halloween season to explore a few of Massachusetts’ historic final resting places. Here are a few that will not disappoint: 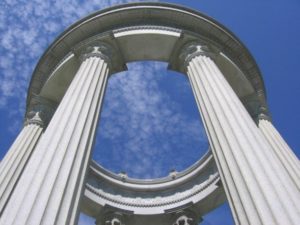 Mount Auburn Cemetery, Watertown & Cambridge, MA – Directions
Take a fall afternoon to ramble the winding footpaths and water features of  “America’s first garden cemetery.” Founded in 1831, Mount Auburn Cemetery is set in a rolling landscaped terrain that summits to tower that visitors can climb for an outstanding view of  the domes of Harvard University and the Boston skyline beyond. The cemetery is marked by almost 2 centuries of grave markers from Civil War heroes to Oliver Wendell Holmes and Winslow Homer. Mount Auburn Cemetery was inspired by Père Lachaise cemetery in Paris, and was itself an inspiration to cemetery designers, most notably at Abney Park in London. Mount Auburn Cemetery is credited as the beginning of the American public parks and gardens movement. 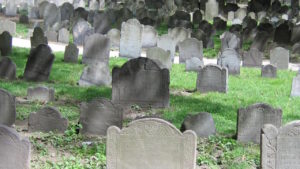 A fall Freedom Trail walk is a rite of passage in New England.  As stop #3, The Old Granary Burial Ground is Boston’s third-oldest cemetery, founded in 1660 and located on Tremont Street. It is the final resting place for many notable Revolutionary War-era patriots, including Paul Revere, victims of the Boston Massacre, and three signers of the Declaration of Independence: Samuel Adams, John Hancock, and Robert Treat Paine. The cemetery has 2,345 grave-markers, but historians estimate that as many as 5,000 people are buried in it. 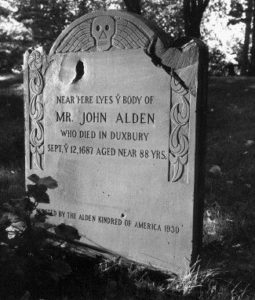 Myles Standish Burial Ground – Duxbury, MA Directions
The Myles Standish Burial Ground (also known as Old Burying Ground or Standish Cemetery) in Duxbury, Massachusetts is, according to the American Cemetery Association, the oldest maintained cemetery in the United States.
The 1.5 acre burying ground is the final resting place of several well-known Pilgrims who arrived on the Mayflower in 1620, including Captain Myles Standish. It was in use from approximately 1638 until 1789 at which point the cemetery was abandoned. It was reclaimed in 1887 by the Duxbury Rural Society, generating a widespread interest in locating the resting place of Duxbury’s most famous colonist, Myles Standish. After two exhumations in 1889 and 1891, it was generally agreed that Standish’s remains had been located and a memorial was built over his grave site. 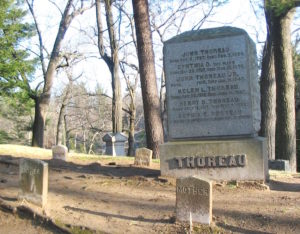 The part of Sleepy Hollow Cemetery most visited is Author’s Ridge, where many of the greatest writers, thinkers and philosophers in American history are buried, from transcendentalist poet and essayist Ralph Waldo Emerson to Walden author Henry David Thoreau and Louisa May Alcott, who wrote Little Women.  Conceived as a “garden of the living” as much as a place to honor the dead – in Emerson’s own words at the cemetery’s dedication in 1855 – Sleepy Hollow was built with the existing natural landscape in mind. Rather than clearing it out and replacing it with neatly-manicured ornamental shrubs, the tombs and gravestones were fit into the trees, hills and valleys that were already there.

For hundreds of years, New England’s natural stone resources have been an asset to the region’s...
Read More