We’ve been seeing a lot about historic buildings in the news lately, notably the recent uproar about the almost complete demolition of a Bulfinch building on Broad Street.

Boston Stone Restoration has worked on dozens of historic properties and we believe strongly in preservation.
Here are just a few of our favorite projects over the years.
The Jewelers Building – Boston 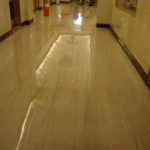 Built in 1922, the historic “Jewelers Building,” has been the heart and soul of Boston’s jewelry industry. Nestled in the heart of downtown crossing, this beautiful art-deco building is home to over 125 jewelers and expert craftsmen. BSR restored some of the stunning marble hallways, restoring polish to a building known for its glamour and sparkle. 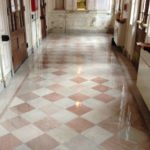 Built in 1914 by the Shubert Brothers it was name for their friend A.L. Wilbur. It was designed by Clarence H. Blackall, in the Federal Revival style. Boston Stone Restoration was contracted to restore the marble lobby floors, walls and stairs. 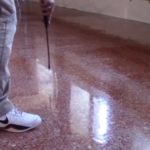 The Belcourt Castle on historic Bellevue Avenue has been undergoing a massive renovation for over a year. Built between 1891-1894 the mansion was originally used as a summer home for Oliver Belmont, whose father was the namesake of the Belmont Stakes. BSR restored pavers and an epic 4,000 square foot mosaic ballroom.
The Boston Public Library – Boston 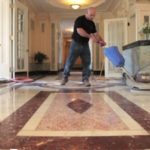 Built in 1888 in Back Bay in Copley Square on the prominent corner of Boylston Street and Dartmouth Street, opposite Trinity Church and near the first Boston Museum of Fine Arts, the Boston Public Library is a city landmark and treasure. In 2012 we restored a magnificent marble floor with inlaid stone, a gorgeous hallway and staircase. This is still one of our favorite jobs!
Harvard Lampoon Building – Cambridge 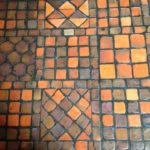 One of the gems of Harvard University’s architecture is the Harvard Lampoon Building at 44 Bow St. Cambridge, MA. Built in 1909, and also called the Lampoon Castle, it was designed by Edmund M. Wheelright.  The 100 year old tile mosaic floor was in need a thorough cleaning and restoration. Although the interior is a highly guarded secret we were permitted to photograph just the floor!