Marble Repair Before and After

Home 9 Commercial 9 Marble Repair Before and After
Request Quote 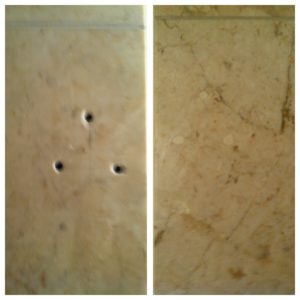 Boston – Marble and other natural stone looks beautiful, but what happens when you drill into stone to attach a fixture and later decide that you don’t want that fixture there anymore?  Such was the case recently at an apartment at the Ritz Residences.  A customer contacted Boston Stone Restoration to fill in six holes that had been drilled into their marble shower to affix a shower curtain rod.   By using a carefully color matched stone epoxy, you can hardly tell that there was ever any hole to begin with!

Last summer we did a similar job, but on a much larger scale.  A contractor contacted us on behalf of his client, a local hospital. They were converting a retail store into a doctor’s office, but needed to remove the existing signage. The signage was a large metal sign that had been bolted onto the façade of a granite building. Boston Stone Restoration was hired to fill in the holes left behind.